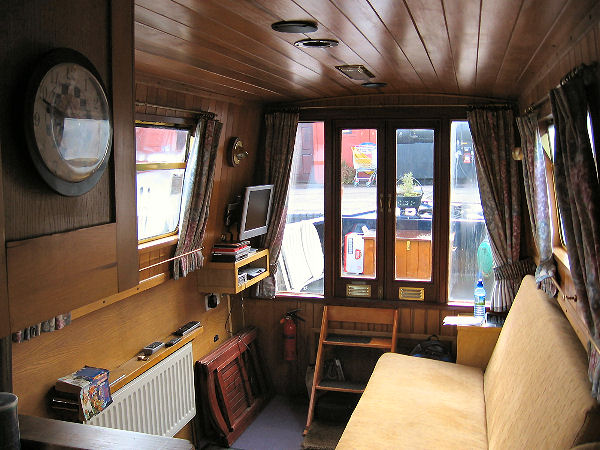 Due to British Waterways fantastic planning of winter stoppages there was not a single route open out of Stoke during this week! We therefore used Sojourn as a base for various outings but did manage a short trip out down the Trent & Mersey on the Sunday. 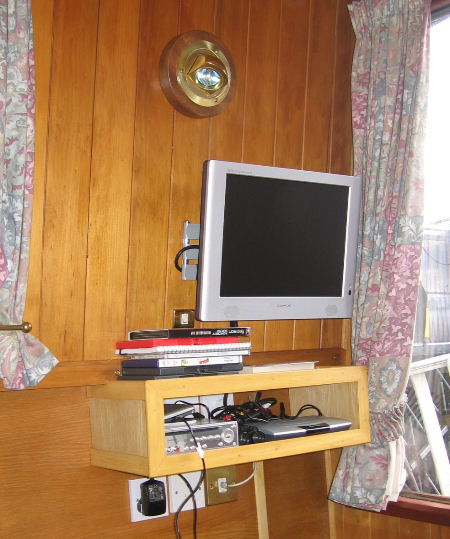 The new saloon looks much, much better. The sofa is much more inviting and the armchair comfy (but rather in the way). Andrew was in his element sorting out the various connections for TV, DVD and Freeview box. The new TV is excellent taking up much less space and with a bright clear picture. The DVD player is excellent and even has video/audio inputs on the front making it easy to connect other devices like digital camera or Playstation. Three remote controls to keep track of now! The Freeview box will need tuned each time Sojourn moves so it will be interesting to see how that works out. 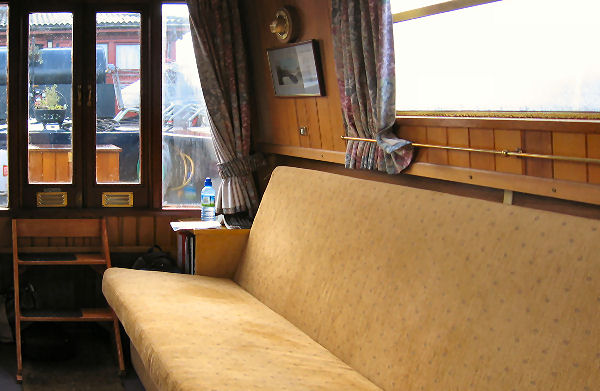 Two other sets of owners (Fred & Chris and Ian & Joan) arrived and we all sorted out the mounds of rubbish - skipping a lot of un-needed clutter. The old box step has been installed as an outside locker replaced by easily removable steps inside - much easier.

To the pub for lunch then waved everyone goodbye mid-afternoon. Settled down to watch a DVD and snack - still stuffed after the carvery at lunchtime and settled down around 9pm. 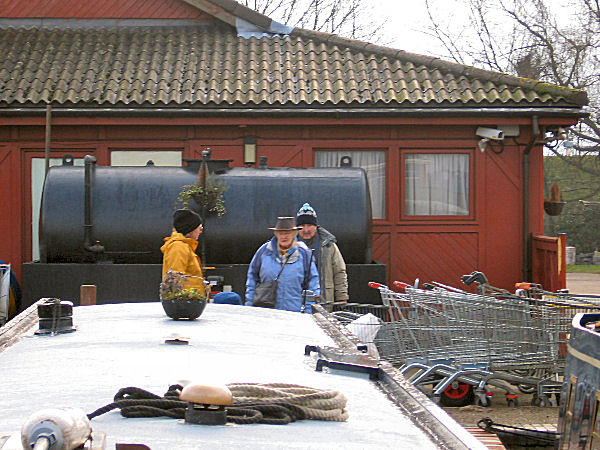 A cold night with thick white frost outside - sung inside though. Early promise at sunshine never really came to much - broken cloud cover all day

Alison's parent and dog coming for the day - arrived after a little detour and being talked in on the mobile. Luckily Alison had also taken a detour yesterday on the way to Morrisons so the details were freshly in mind to work out where they had got to!

Soon safely aboard - the dog treated as a sack of potatoes - and underway by 10:30am. Good timing at the lift-bridge out of the marina as another boat exited just in front of us and dealt with it. Very built-up area of canal with a lot of rubbish in the water especially around the roadworks but then out into more pleasant countryside. There was a football match on at the Britannia Stadium (Stoke v. Birmingham) and the howling that was going on was truly impressive (Stoke lost 1-nil...). 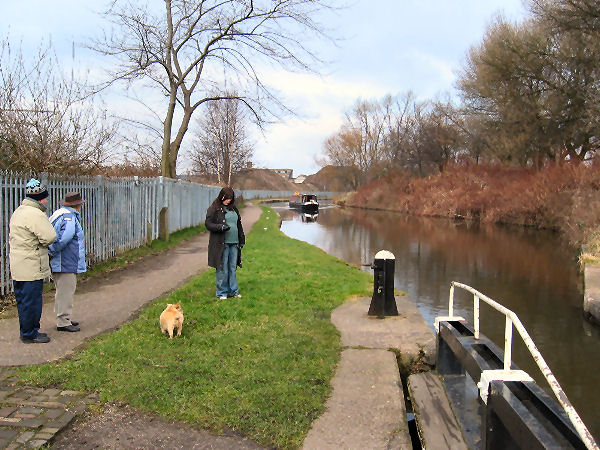 Stopped for bacon or sausage sandwiches. Weather cold and breezy but dry so both parents spent a lot more time outside than expected. Mum even had a creditable go at steering! We had a late exchange of Christmas presents during the day too. 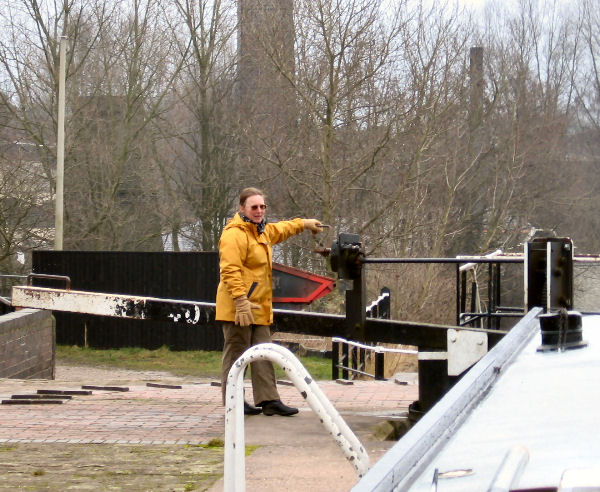 On our return, we were adopted by a rather strange character who kept telling us local stories - extremely slowly - and who remained pinned to us all the way through the set of 5 locks - finally stayed behind at the last lock. He was clearly interested in canals and, as we appeared to be the only boat moving, he rather clung to us. 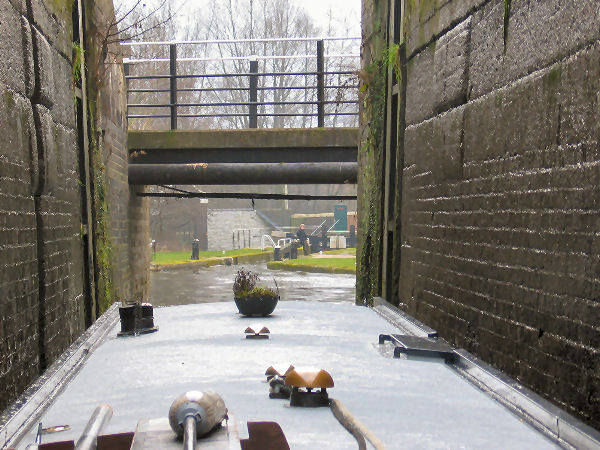 Back to the marina and a bravura piece of manoeuvring from Andrew to take us into the mooring with the minimum of fuss (gee shucks... Ed.). A brief pause to brush hair and rejoin civilisation then away to the carvery for another enormous carvery meal. Marc hard put to stay awake for pudding. The kids settled down immediately on our return to Sojourn around 8pm. 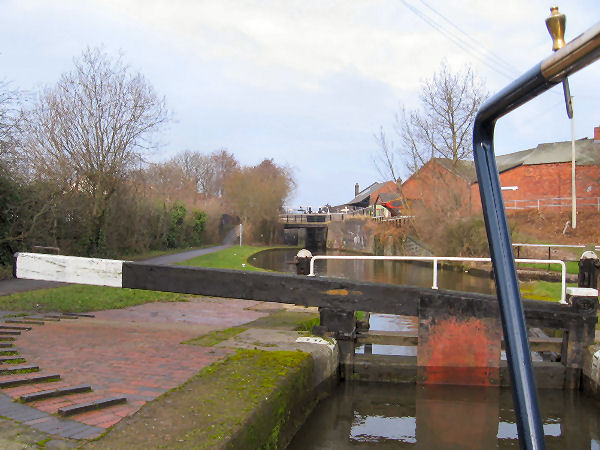 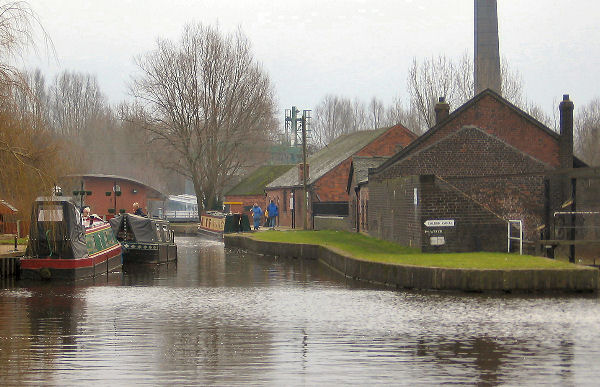 The 0 miles mentioned above is somewhat inaccurate as we covered a fair distance on foot! After a leisurely start we walked into the centre of Stoke via the first part of the Caldon Canal. We went round as far as bridge 8. The towpath is going to be closed for a while starting in March for refurbishment which will be a big improvement as there is a rather muddy section in the middle.

The centre of Stoke is OK with plenty of shops but we were struck by a) the amount of rubbish on the canal banks and b) the large amount of derelict land and buildings surrounding the immediate town centre.

Had lunch in the Wetherspoons pub in Stoke. Nice meal despite being banished upstairs to the family area for the heinous crime of having children! Having walked our legs off we just snacked and watched DVDs in the evening

Again many miles covered by car and foot today during visit to the National Boat, Caravan and Outdoor Show at the NEC near Birmingham. Fun day out especially for Andrew and Alison. Kids moaned a bit but secretly enjoyed being able to roam the halls. Very big show though large areas devoted to caravans and mobile homes which did not interest us.

There were a few narrowboats which were interesting to look at for different layout ideas. Lots of interesting little stalls around the perimeter of the halls. Andrew got a pair of telescopic walking sticks. Alison was very pleased with a leather hat and a pair of walking boots. Lunched on some superb Cornish pasties. Arrived at around 10:30 and left at 3pm with our legs worn down to stumps!

Kids kept asking if we could go to London as we left the NEC (prompted by roadsigns pointing that way). This probably prompted the thought in Andrew's brain to suggest a trip to London for Marc's birthday the following day. The aim being to go to the Texas Lone Star for a rack of ribs!

Returning to boat, we couldn't seem to get the central heating working so persuaded the stove to light which then got so hot that we were opening windows and doors. It was still glowing at about 3am!!

Marc's 12th birthday! Up very early and on the road by 6:30am. Slow journey with queuing traffic out of Stoke and several holdups on the M1. Had a light breakfast en route (saving ourselves for the ribs!) and arrived at Edgeware around 10:30am. Took the tube to Gloucester Road arriving about 11:30.Texas Lone Star not open yet so repaired to coffee shop across the road to wait for signs of life. Since we weren't sure if they opened for lunch, Andrew got a 20 min internet ticket to try and find their website for opening hours.

Disaster!! Texas Lone Star closed down in October 2005! Time for a change of plan... Went to Leicester Square to see if there were any films we wanted to see. No! So had meal at Chiquitos Tex-Mex restaurant. Marc had the buffet which mainly, for him, involved ribs with a single piece of cucumber to be healthy!

After lunch Alison took the kids to Hamleys while Andrew checked out the hotel being used for college trip in May (very basic but fab location right next to Piccadilly Circus). Marc got the Playstation game he wanted. We then wandered along Oxford Street looking for a coat for Marc. Got a really cool one!.

Lads had a mooch up Tottenham Court Road looking at electronics while the girls looked at clothes. Then off to Science Museum where we spent a fun 90 minutes or so until we got kicked out at 6pm. Walked back to Gloucester Road again and had a Burger King before heading back to Edgeware. Tube quite crowded and Marc looking very tired by now.

On the road by around 7:30pm and a very quick journey back to Stoke arriving 10pm. 4 hours there, 2.5 hours back. Collapsed into bed immediately after tracking down and sorting out fridge alarm signal caused by battery flattened by light left on all day... 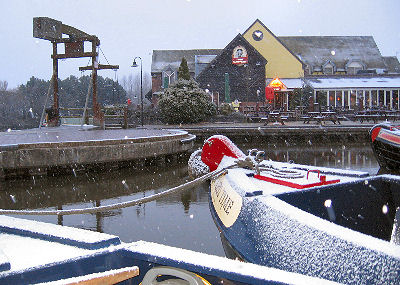 Up around 07:30 to find heavy snowfall just starting. Kids played outside while log being written and started packing. Started engine around 8:30 to recharge batteries flattened by light left on all day yesterday.

Got some refresher training from Andrew Cooley on the central heating. Pump hadn't been working as header tank needed a top-up. Should work fine now. Got some more firelighters and Taybrite on board. Paid up and on the road by about 10:15. Reasonably trouble-free journey home despite the wintry weather.

7 weeks till we are back on-board during the Easter break. Sojourn will be at Wigrams Turn by then. Can't wait!