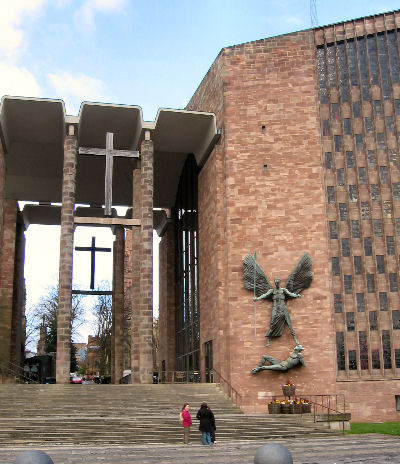 The journey was remarkably quiet and trouble-free especially considering that it was a Bank Holiday. Since we had time to spare, we had a wander round Coventry. The cathedral is very impressive and the shopping area is huge. 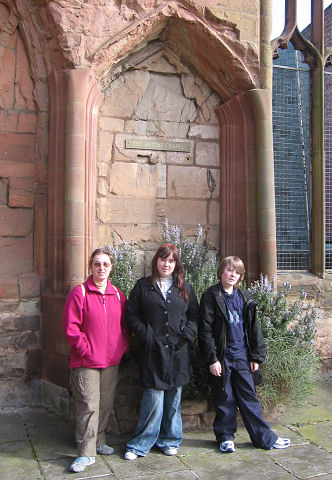 So, why are the Smiths standing in front of a random piece of the ruined Coventry Cathedral?

We had asked if Sojourn could be ready for us at 2pm, so as to give us a headstart at the Napton flight. 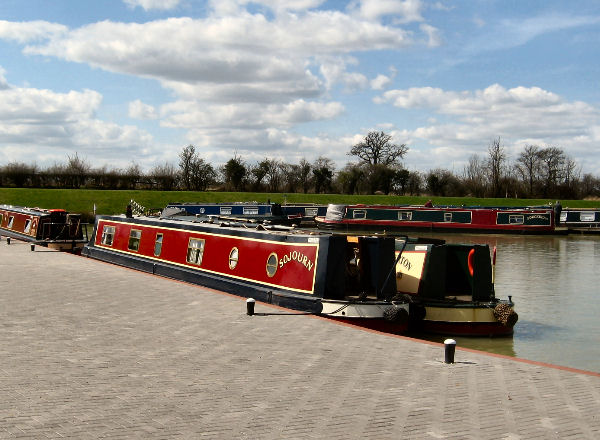 So we turned up at 1.30pm and hurray! there she was, moored at the loading wharf and good to go. We were off so swiftly that we didn't move everything back to the car that we could've, and also forgot AD's sunglasses.. and it was a gorgeous sunny afternoon, no wind and really warm. 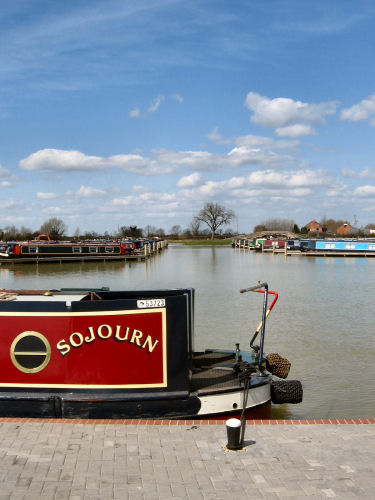 A short wait at the first lock, and found ourselves in company with nb Serenity, an Ownerships boat and a year older even than Sojourn - looking good though, clearly well looked after. 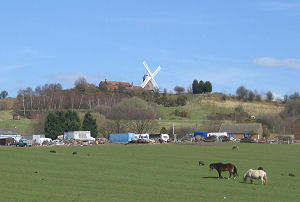 The boat ahead of Serenity was as good as telly - they had raised faffing to an art form. At the last lock they took an age, then immediately beyond winded, so we wondered if they would want the lock back; no,they were mooring. So while Serenity came up the lock, they took their boat for a walk aways; as the lock cleared, they brought their boat back; did they now want the lock? no,they just couldn't quite decide here, so they were going to wind again and go a bit further... so up we came and left them to it, whatever it was. 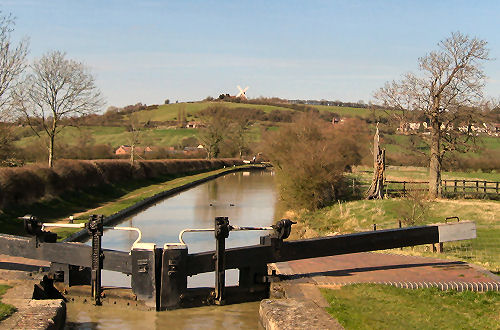 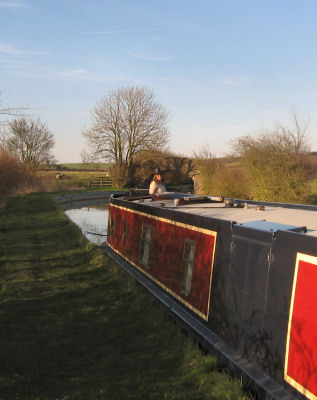 We continued a little longer into the evening and moored up at around 6.30, ready for some beers and cheese on toast. Both AD & AJ knackered so in bed by 8.30pm - slept like the dead. 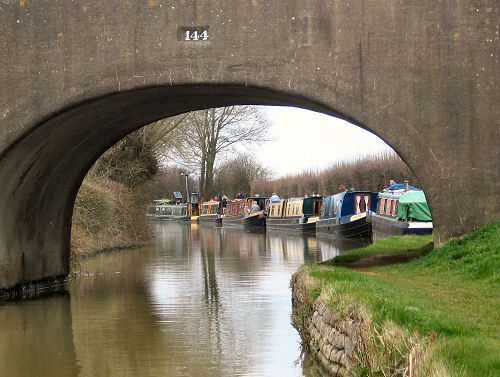 Andrew up bright and breezy and on his way while the rest of us blinked blearily at the teapot. The weather quite different today; while dry, it was cool and windy enough to give us pause for thought on some corners. And definitely the need for windproof layers..

Alison made (in her own words) "a fair old mess of one bend - thought it was your normal sort of thing, only to discover that it was a huge U-bend with a blind bridge right in the apex. It just kept on going and I hadn't given myself enough space for such a swing. Thank goodness there was nothing coming the other way!" 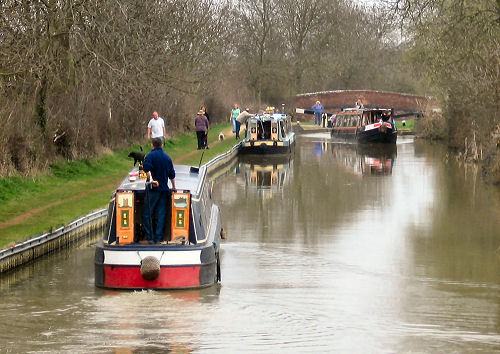 We approached the top of the next flight (Claydon) by about 11.30 am, to find we were somewhere around 9th in the queue. No problem though, we had coffee and then we had lunch, and gossiped with other folk waiting their turn. The wind had dropped and the sun making a few attempts to if not come out, at least to show willing. And then we were in the flight and made steady progress downhill. We arrived at Cropredy at 4pm, and found a pleasant mooring close to the village. Marc and Alison went to find the pubs and a supply of milk, and all showered after the day's exertions. Pub for the evening to be followed by chili,as long as it has defrosted! 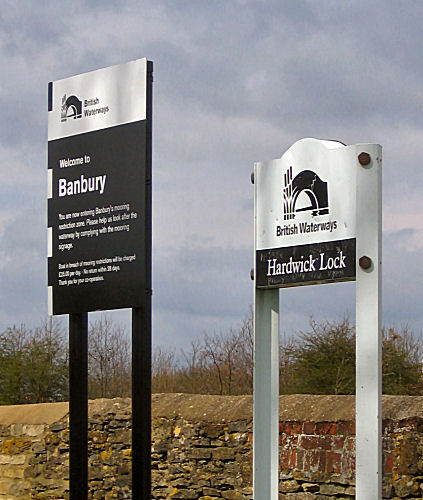 Woke to bright sunshine which threatened to cloud over, but not seriously. We sat listening to the church bells pealing for half an hour orso, spared a thought for the St. George's choir getting ready for the service.

On our way 10ish - a pleasant sunny morning with a frisky little breeze leaning on us every now and again. Accompanied by ducklings - the Cropredy Canoe Club out in force. Some dozen canoes of various types whizzed past us, and then whizzed past us again in the opposite direction going back home. These included one double canoe which on approaching a lock first thought they might carry their craft past the lock, but then decided that this would be their return point - and turned directly across our bows and out of sight. Andrew had to fling us into hard reverse to avoid, dear reader, tragedy. They emerged around our other side looking faintly sheepish and giggled away. I wonder if they even realised how close they were to drowning? 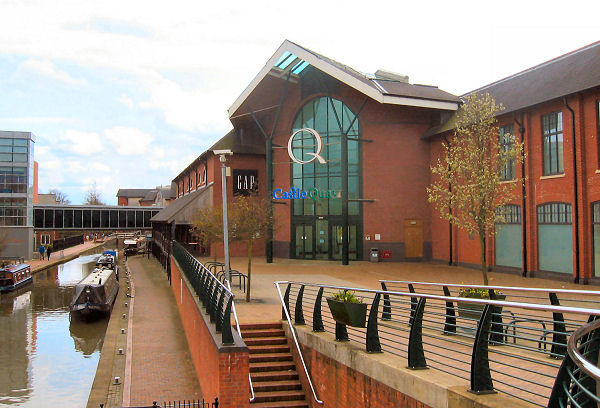 Thankfully, no further excitements - into Banbury and our choice of visitor moorings - excellent facilities - in just nice time for lunch. 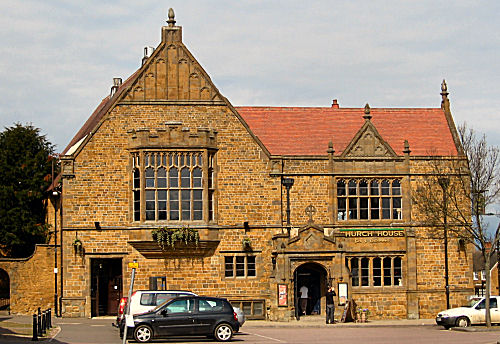 After spending our usual half hour wandering around town trying to decide which watering hole to patronise,opted for the Church House bar and restaurant - and can recommend it, especially the cheesecake. Laura was gripped by an art attack during our visit, and had to express herself into mum's Palm, there being no pencil and paper available.

You can hardly visit Banbury without finding Banbury Cross and the fine lady upon a white horse, can you? 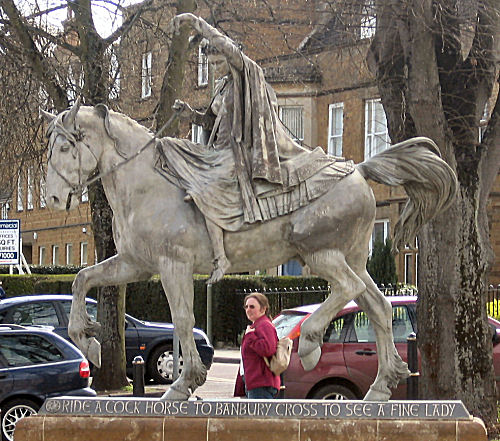 Back aboard to digest, and watch Bridget Jones' Diary - The Edge of Reason, while waiting for enough space to get into the Easter eggs!

Another gentle start to the day,on our way by 10ish,to get watered up below Banbury lock. Sunny periods and a fresh gusty breeze swinging our quarter in occasionally unexpected directions; but otherwise a placidly uneventful day's motoring. There are quite a few lift bridges along this section but they are all normally left in the open position saving a lot of work! 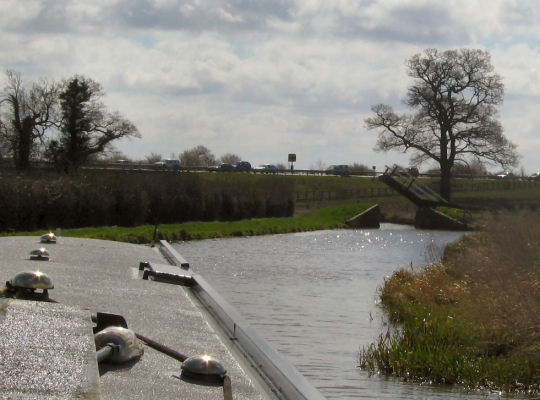 Jacket potatoes for lunch; the children entertained - somehow - by the dvd, Hellboy. [it was actually quite good :( ~laura].

Some of the bridges along here were renumbered, apparently when the canal was modernised and shortened in the 1820's The winding hole almost completely obscured by marina moorings at Aynho - somewhat of a liberty. Resigned therefore to winding below Somerton Deep Lock - when discovered a winding hole, not marked in Nicholson's but 60' length. Andrew turned easily enough despite the strong wind trying to press us to the bank. Moored soon after at about 4pm, in the lee of a hedge and well away from the railway - just the job 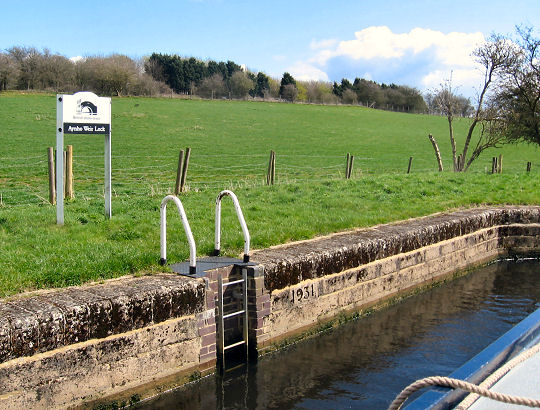 All took turns to shower and the parents got acquainted with the wine box while awaiting our Purser's latest triumph - pasta alla carbonara. Watched War of the Worlds on dvd,the kids backchatting throughout and thoroughly irritating, so can't really tell you if I enjoyed it or not!

On our way by 9.30am on a bright morning, starting to retrace our steps. No excitements to report, except at Grant's Lock, where we found an on coming boat had taken our lock without checking (forward visibility at that point is totally obstructed by a road bridge and on the way down I had done the identical thing, although in our case without consequence). 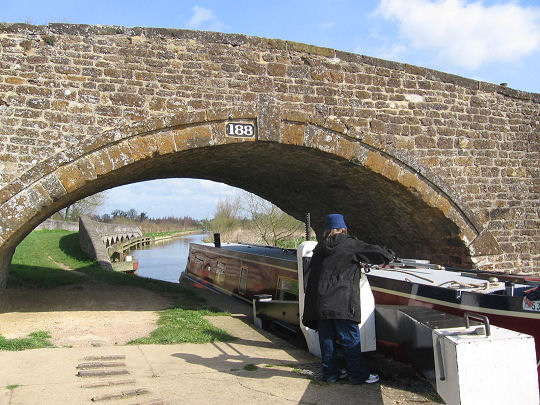 Stopped off at Morrisons on the southern outskirts of Banbury, and easily accessible from the towpath. With fresh provisions, had lunch then to the water point and thenback to the centre of Banbury, mooring almost exactly opposite our previous mooring point. Done with engines at 2.30pm and time for some retail therapy, until rain brought us back aboard for a lazy afternoon and evening. Booked a table at the Brasenose Arms, Cropredy, for tomorrow night, when Cousin Nicholas will join us. Watched Batman Begins, with the kids interested this time and a good film. (note from laura- good is a terrible understatement) Pasta ratatouille and chicken - very nice too.

Cool and damp morning brought news that Nicholas is not now going to be able to come as his divorce has moved to a critical phase - retains hopes for Thursday, however. An ill wind - stopping at Cropredy would have left us with a seriously heavy day tomorrow, so now we can press on to Fenny Compton or beyond, giving a gentler day's locking towards Napton on Thursday. Made good progress on fairly empty waters through a flippin' cold damp wind. Alison had to take her hat off just when she needed it as it kept blowing off! Paused at Cropredy Stores for bread for frying at a future artery-hardening fry-up and cakes for pudding. Alison took over the driving though the Crofton flight to give Andrew a chance for some exercise, and then Andrew took the helm again to let Alison warm up a bit. (tho' hat now tied rather more firmly to her head). Weather started lifting as we arrived at Fenny Compton; moored a stone's throw from the pub. Gave a hire boat a hand at pulling their wayward nose into the bank so they could water up. Moored by 4pm; retired on board to consider the pub menu and nurse our appetites. Shifted to pub and thoroughly enjoyed the squishy sofa but the meal less so - ok but so-so service.

Back at boat, Andrew decided we'd have to go back home tomorrow evening, to catch up on prep. 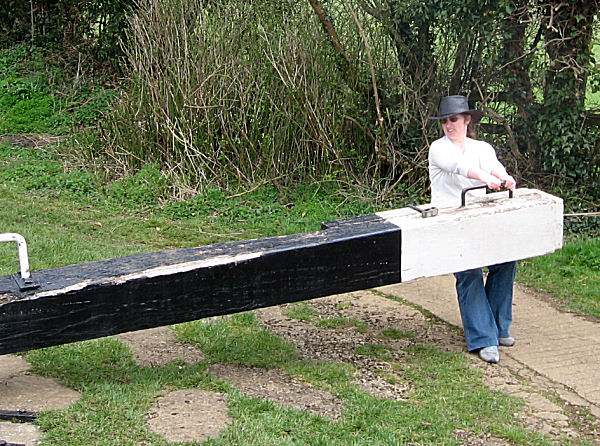 Very wet overnight but weather held off all day. Andrew saw a dead sheep in the canal and another one in the field! AD set off single handed at 7.30am and we got to the top of the Napton flight at about 12 noon, to find a huge queue. it seems the butty of a working boat trying to come up the flight had got stuck in the second lock. In the end they had to admit defeat and be dragged out backwards, back through the locks. Once this cleared, we made steady progress. 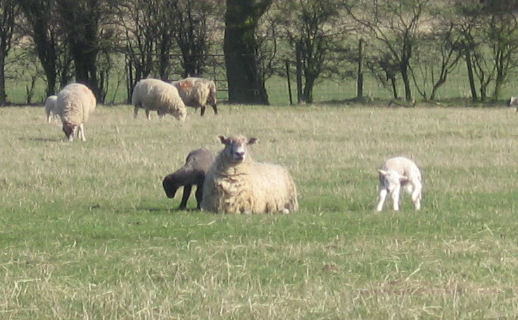 Amazingly enough, we were again going down the Napton flight behind Serenity; not only that, but followed by another Ownerships boat, Endeavour. We came to a halt again at the last lock - Serenity on entering the lock had allowed her centre line to get caught by the prop. If the helm had had her foot in a loop of rope, she could have lost her foot - as it was, the rope whipping tight by her leg caused a massive bruise. In the end they had to cut through the rope at its anchor point on the roof, to then untangle the prop. Alison and Marc helped them down the lock and onto a mooring point for them to continue repairs and allow us on our way. 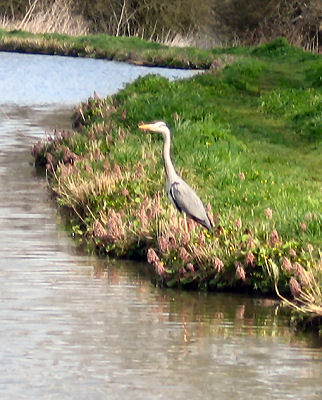 Back to the marina (followed shortly by Serenity), we were efficiently dealt with by the staff (once the only cloudburst of the day had spent itself). Once again our new estate car was a joy to load up, in contrast to the careful packing needed with the old saloon. Our next voyage will be in August.