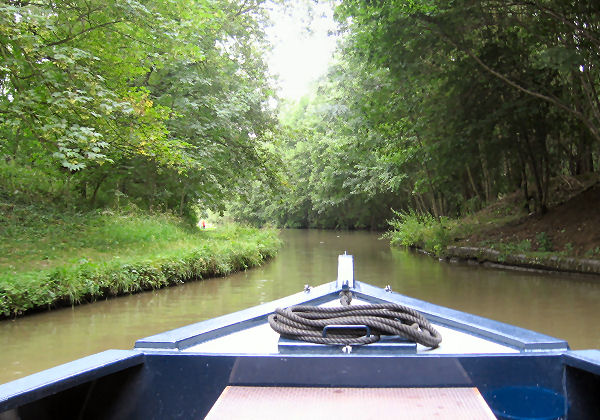 Only three of us this time, Laura having other business at the Thornton Cleveleys Horticultural Show. Arrived in plenty of time so checked out the Admiral Nelson on the Braunston Locks down an excitedly narrow lane. Fine lunch with plenty of entertainment outside at the lock - noted traffic already steady.

At the marina for 2pm - Sojourn serviced and ready, so quickly loaded up - all we then needed was for the northerly wind to shut up so that we could get off the quay - on our way by 14:50.

The canal itself seemed a little more sheltered than the open marina but still breezy. Trouble-free cruising - main excitement coming through Braunston to be met by a floating bungalow (wide beam) La Belle Epoque on her first trials and festooned with human fenders determined that any one else would sink before they allowed the new paint to be scratched! It seems a) she was due to go to France b) they would have to close Braunston Tunnel for her the next day. All in all we were quite glad to be going away from her. Hate to think how much she cost (250K?). 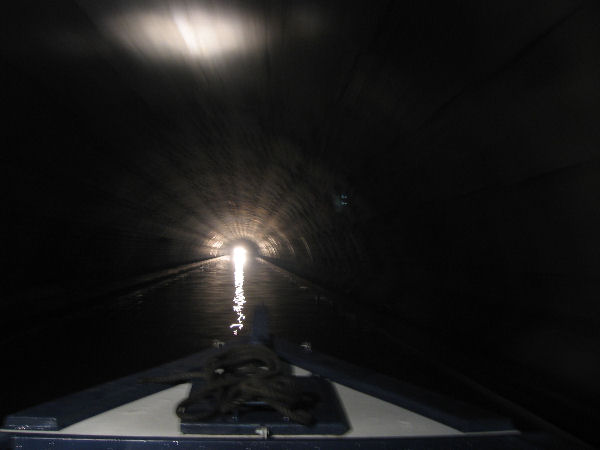 Andrew made the Braunston Tunnel look easy, despite an oncoming boat with an anti-aircraft style searchlight out front - completely dazzling. Then moored up in the countryside beyond the tunnel at 7pm for sandwiches. Within an hour we were nodding and by 9pm all lights were out. 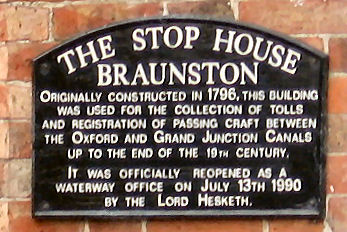 Woke to grey skies and coolish wind but dry and with occasional gleams of sunshine to push the thermometer up. Surfaced at 8am and moving by 9am. Found a partner for the locks straightaway - Alison's turn at the helm. Shop at the bottom of the flight so took on supplies without holding up progress - which was so smooth that we were at Weedon by lunchtime. Moored to reconnoitre the pubs as it will be an evening stop coming back - plumped for the Heart of England and both Alison and Marc have chosen what they will be ordering (probably) (in fact we didn't stop at Weedon on the way back...). Suitably lubricated, Andrew took us onwards. Not much traffic except for quite suddenly at Bridge 27 when a queue of one boat after another - 4 in total - kept appearing in the bridge hole. 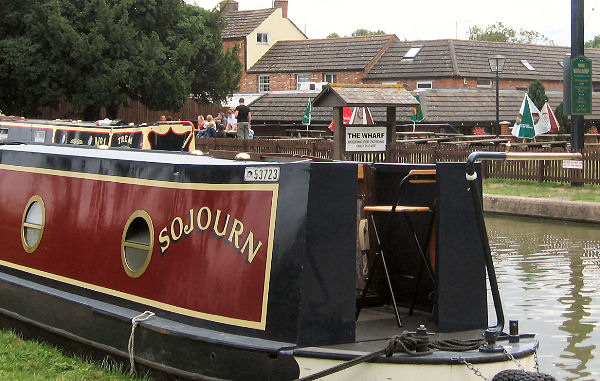 A couple of miles down the line took us to Bugbrooke Wharf where we read of a pub that specialises in home-made pies. Arrived at 3.30pm to find a top mooring opposite the pub! Settled down for a siesta before going to investigate further - well worth noting as it turns out, The Wharf Inn - a new building but very pleasant and super food with imaginative specials and huge helpings. Marc had to admit defeat 2/3 of the way through his Toffee Lumpy Bumpy and all of us were stuffed. Very good watering hole. 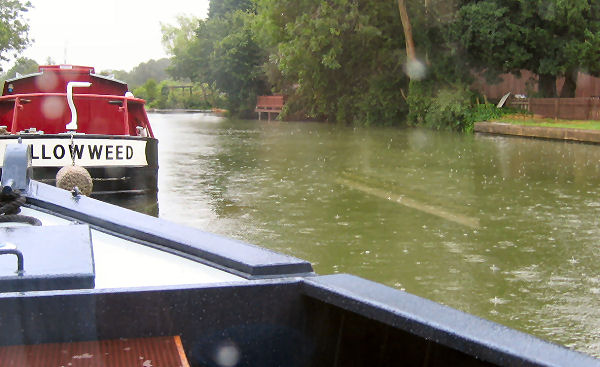 Heavy rain overnight, continued in morning. Andrew festooned in plastic got us moving by 9:15, rewarded by lightening of downpour and at least the wind is on our tail. Motored through the day with weather gradually improving into a lovely afternoon. 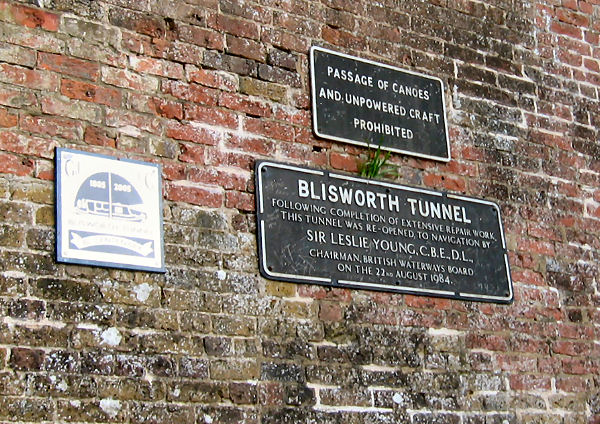 Alison started off through the 3rd longest navigable tunnel on the UK system but in a rising tide of claustrophobia asked Andrew to take over as boats approached. Tunnel was busy - we passed 4 and the air was quite smoky by the time we got through. 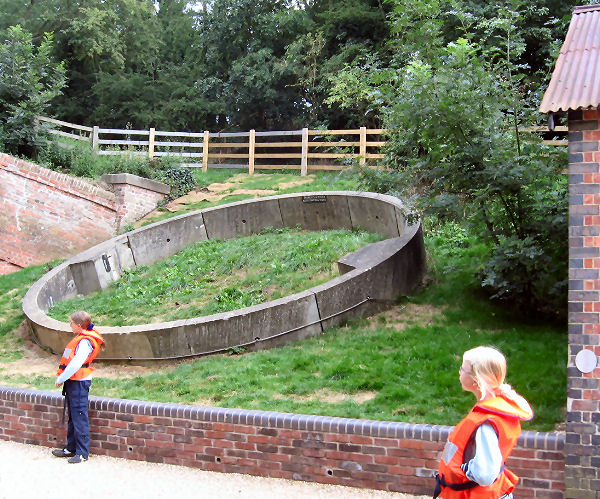 Emerged at Stoke Bruerne - impressed by the size of the tunnel section displayed on the bank from the 1980s renovation. Had the bit between our teeth though so paired with Midsummer to go through the locks. Through fairly quickly and onto the long lock-free section. At Yardley Wharf had a problem with Serenity. She had been catching up to us during the preceding long straights. We slowed for the marina and moored boats plus bridge ahead with approaching boat. Alison turned to see Serenity's bow moving out onto our quarter and further surprised to see one of their visitors alone at the helm. She signalled to indicate that there was oncoming traffic and the helmsman nodded grinned and accelerated to overtake!! Andrew had to throw in reverse to let him through with space for the other boat now coming through the bridge.

Having squeezed past they then moored a little later for lunch and then came with us at Cosgrove lock - made a complete hash of trying to get into the lock. Alison had to grab their bow line to guide them in! Andrew (keen not to get behind them again) was first away out of the lock and didn't want to slow down much to pick up Alison who nearly fell in the drink while scrabbling aboard. No harm done though beyond a couple of bruises. (Andrew has now resolved not to let poor behaviour on the part of other boaters goad him into acting like an idiot...). The other excitement was on the approach to Milton Keynes where we found a boat being (expertly) poled across the cut to rescue the fishing rod of a youngster on the bank. 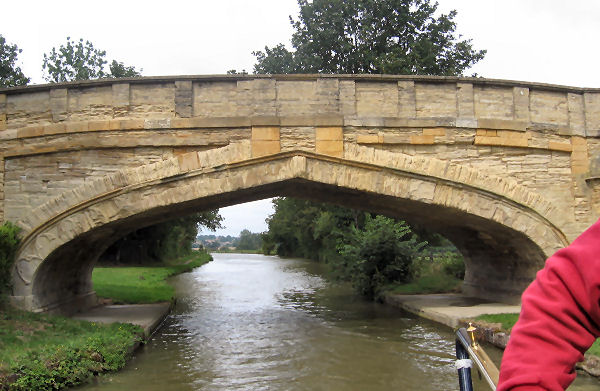 Some interesting features and pretty countryside on the way into Milton Keynes. This is Soloman's Bridge (Bridge 65). 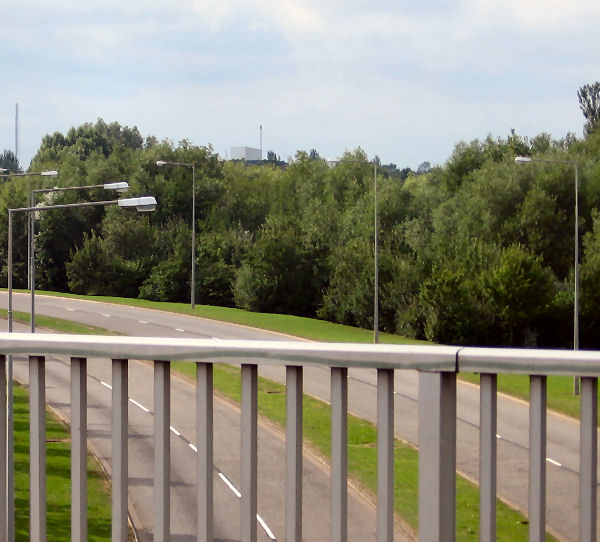 Grafton Street aqueduct. Always enjoy boating over the top of a road! 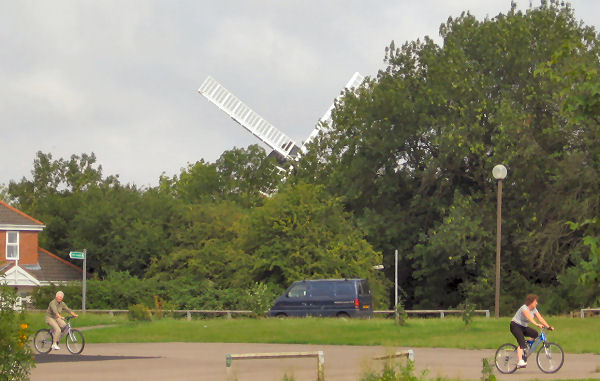 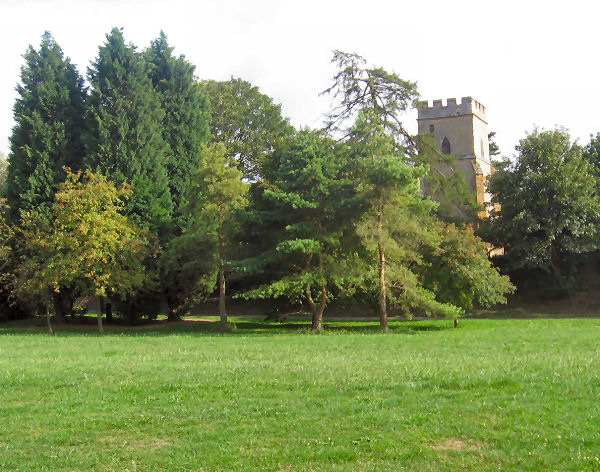 Pretty church (not sure where...) 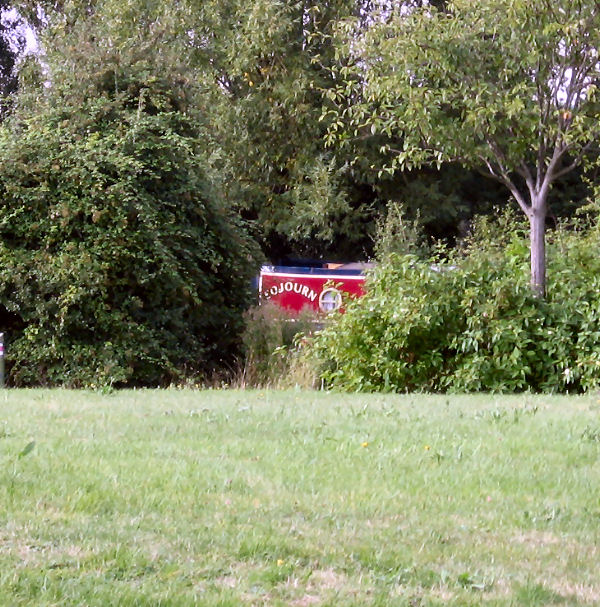 Sat and watched in admiration then continued to moor at Campbell Park in the heart of Milton Keynes at 6pm. And not a building to be seen! Woke to grey skies and heavy showers. In no hurry to do anything but eventually walked through the park to the shopping Centre (Milton Keynes' cathedral!) Spent much of the day shopping and exploring Xscape - checked our emails at a cybercafe - watched the skiers and snowboarders in a real snow slope - and the freefallers in the skydiving simulator - what a cool place! To Sainsburys for groceries and back to Sojourn for a cuppa and a sit-down. Alison's cousin Nicholas joined us in the evening to show pics of his new house and then out for dinner - back to a place called Old Orleans. We thought it was just a rib-shack but it turned out to include a pool hall, slot machines (ridiculously expensive) and then a 20 lane ten pin bowling alley - already booked full. Certainly different - good food anyway and back to Sojourn for a chinwag and bed. 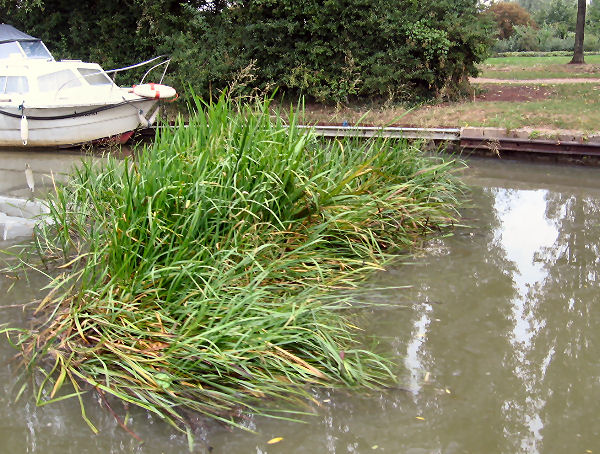 Packed Nicholas off to the office - short on battery and hot water after a day's activity - and at a horribly early hour so that he could be sure of a parking space..yuk! So set off to the nearest winding hole past a mat (about 2 metres square) of reeds floating mid-navigation, turned, and headed back north. 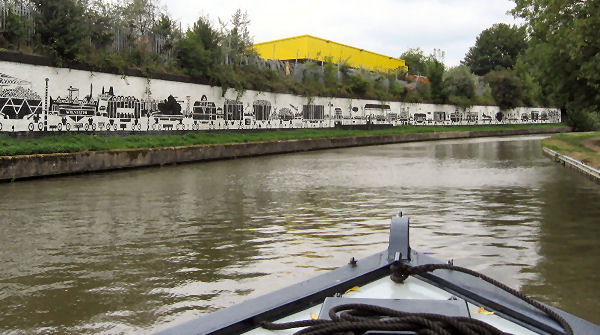 An interesting mural on the way out of Milton Keynes 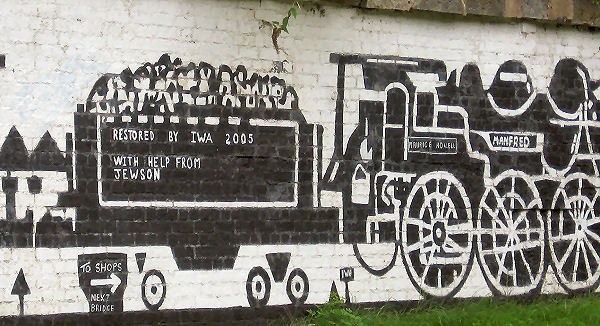 Weather chill wind but grey skies lightening. Event-free boating to Stoke Bruerne moored in the pound between locks 5 and 6 - visited the interesting museum and then fell into the Boat Inn for a few rounds. Floated back to eat something absorbent - intended to return to the pub but went to sleep instead! Lovely quiet mooring. 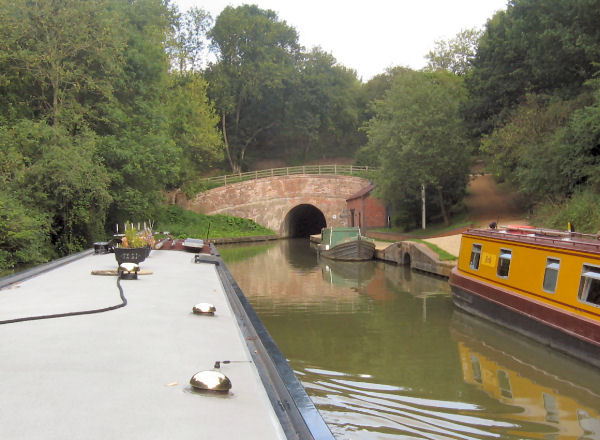 On our way 9ish through the last 2 locks into Stoke Bruerne and the Blisworth Tunnel. Once again Andrew made it look straightforward. Settled down to steady motoring in pleasant weather with no excitements. Passed Weedon too early for lunch so had sausage and egg later on board. Paired up with Ownerships boat Goosemoor through the Buckby locks. A couple of BW up and down the towpath to see people through - some of the gates really heavy. Honourable mentions, not yet made this week - Marc's efforts sterling and increasingly professional (certainly shows up a good many of the adults we meet!). Found a quiet mooring in the cutting leading to Braunston Tunnel to be instantly joined by a throng of boats recognising a good idea... 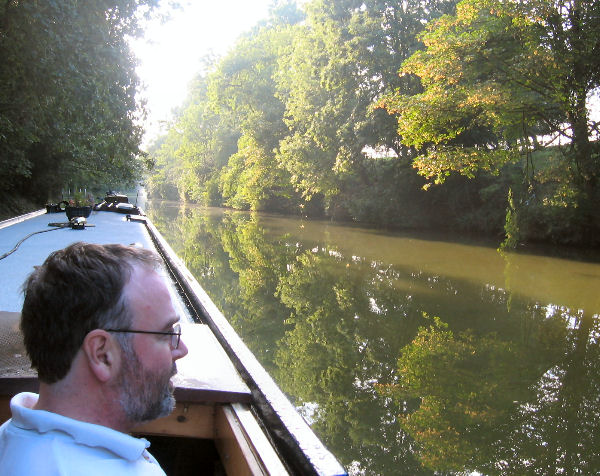 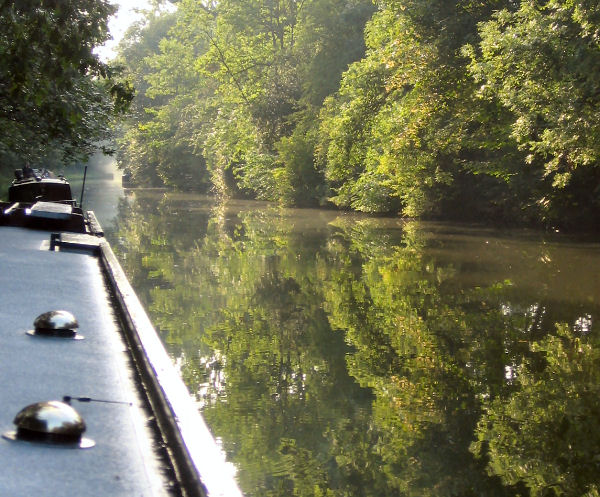 A leisurely start before tackling Braunston Tunnel and locks. Not a soul moving behind so went down locks alone - traffic the other way so locks being set most of the way. Hurrah! Busy through Braunston - had a fender get pinged off on jagged piling today which made up for the bonus fender found floating in a lock yesterday. Had been intending to stop for a look round Braunston but no mooring available so continued past lines of moored boats. Later increasing livid sky became full-blown thunderstorm - rain coming down solid and lightning all around. 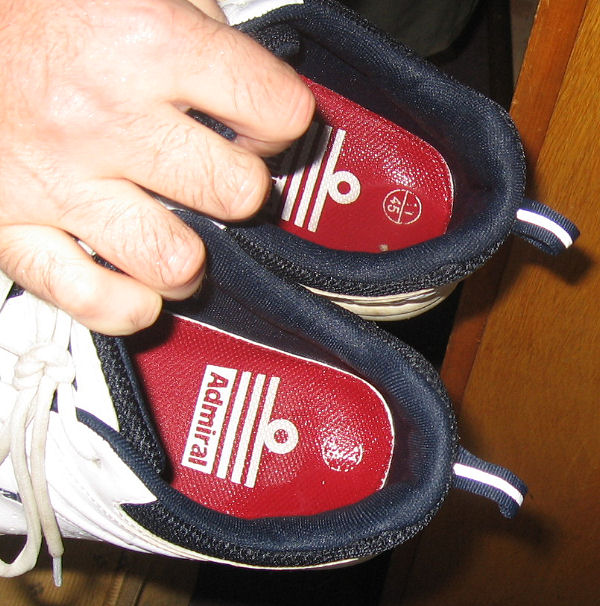 By the time Andrew trainers were overflowing (literally!!), he decided it really was time to pull in and wait it out - before he was struck by lightning!. Luckily coincided with lunchtime. Once the storm had gone over the clouds began to break up again - we continued past Wigrams Turn to the Bridge Inn winding hole. A boat unmoored just as we had winded and were discussing where to moor - leaving us with another top mooring just outside the Bridge Inn!. Sign outside recommended booking (to avoid disappointment) so we did. Siesta before dinner at 6.30. Excellent meal despite shortage of several of the listed desserts. No burgers (Marc's latest obsession) so he had to make to with a huge steak (poor child...). Alison had prawns with sweet chili sauce then venison pie then lemon shock. Andrew had mango and brie parcels then beef wellington (which was superb) then chocolate slice. Marc followed his steak with a strawberry sundae. Splendid conclusion (drinks very expensive though...) to an excellent week despite lack of purser, much missed!.


Engine on 8:40 once the rain paused. Bit of a shower as we headed to the marina. Trouble-free transfer to the car and on the road about 10am. Rather hassly trip home due to heavy traffic, accidents and queues for music festivals backing up onto the motorway. Next Sojourn related activity is the owners' meeting in November then our next week in April 2007.