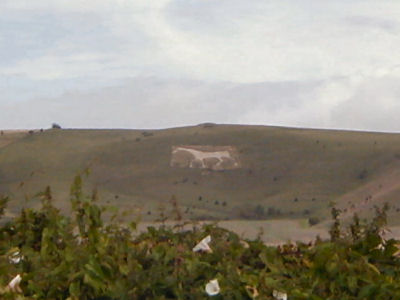 This was our third week on Sojourn. Andrew tried to update this log during the week using a Palm Tungsten E2 (newly acquired), a Motorola V600 camera phone, Bluetooth file transfers and FTP over a GSM internet connection. Didn't work too well... So here is the full version uploaded from home! 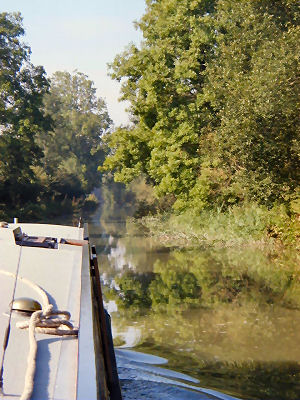 Up around 7am, packed and on the road before 9am. Trouble-free journey. Had some time to spare so went to see the Avebury henge. Unfortunately it started raining heavily just as we arrived so we didn't stay long! The BBC weather website had been forecasting bright sunshine...

Arrived at the marina just before 3pm. Sojourn was the innermost of the 3 Ownerships boats which made loading up easy. Finding room to stow all the food was fun! The outer boat Slipstream also loaded up quickly and set off making it easier for us to get out (luckily Sojourn was pointing the right direction!) and we managed to get underway by 4:15. Rain had stopped before we unpacked and held off until just after we moored near the Barge Inn at Honey Street. 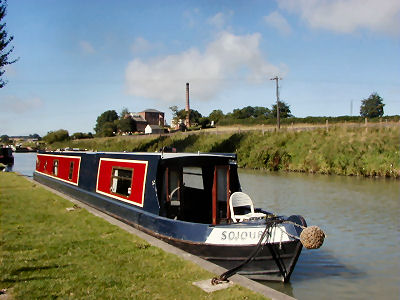 Another boat came out behind us near the Barge and pushed to come past. Turned out they were hurrying to lunch at the pub at Pewsey!.

Lunched on quiche and salad before tackling the locks. Four locks to the summit pound then six to Crofton Pumping Station. Aiming to visit the pumping station tomorrow. Found nice moorings right next to the Pumping Station. According to Nicholson, they are actually in the Crofton Flight but are proper ringed moorings and so convenient!

Alison took over the steering after lunch and so got her first try at a tunnel (the Bruce tunnel). Didn't hit the sides at all!. 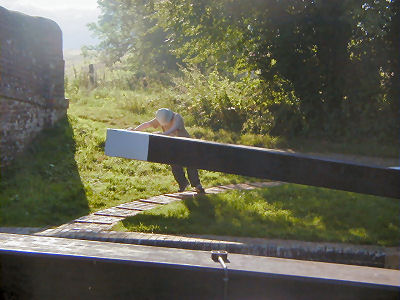 The weather warmed up considerably during the afternoon making it hot work for Andrew & Marc on the locks! Dinner of lasagna and red wine. 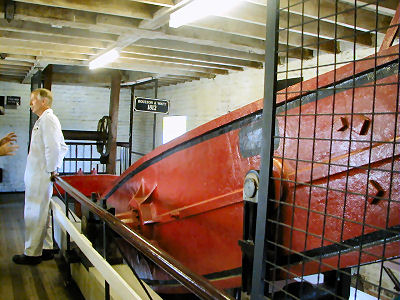 Crofton was fascinating! Amazing that 200 year old machinery can shift so much water virtually silently. The engines were under steam as it was a Bank Holiday weekend so we were able to see them being started up. They have to be manually controlled while sucking air as they are started. Even when pumping water they need constant supervision as the steam pressure can vary. Apparently the more reliable engine is the oldest (1804 by Boulton & Watt). 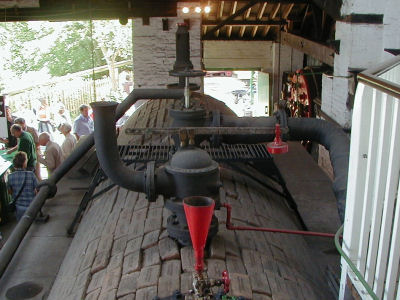 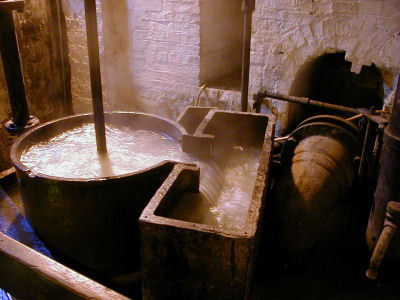 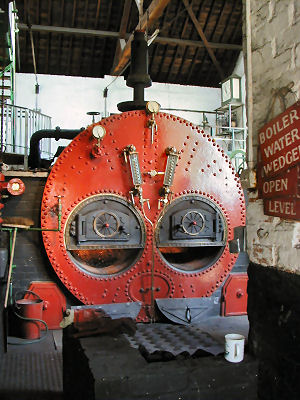 Walked to Great Bedwyn for lunch at the Cross Keys..

Not a bad lunch. Marc liked his ribs and the girls polished off their vegetable enchiladas. Andrew's nachos were very soggy from having the chili heated up on top of the tortilla chips rather than separately. A couple of pints of Fullers London Pride took away the pain!

Quiet afternoon / evening apart from having to reposition the boat when the water level dropped and left us tilting sideways! Lots of Canada geese flying over and a couple of white geese patrolling our pound. 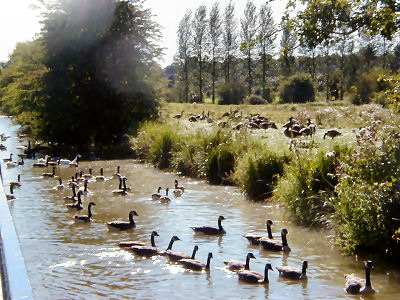 Waited around for a while to see if anyone to share locks but clearly no-one else at mooring heading our way and no-one could come through from the top of the flight for ages so we set off alone.

Knee deep in Canada geese on the long pound - spectacular. At Great Bedwyn, hoped for a locking partner in a boat which was filling up with water but, again, after a long wait they didn't appear so continued alone. Very hot sunshine and canal clearly very shallow - impossible to get near the banks in many places.

Hungerford has a pretty waterside area with water and rubbish facilities so had a good fill up and then off to moor. Were advised by another boat that the only way to get near the bank would be to go aground at the bows leaving the stern free to be able to get off again the next day. Worked fine - a nice snug mooring next to a country park. People pay fortunes for houses with such a view. Lots of rabbits in the park in the evening. 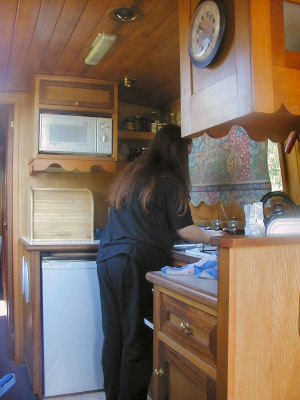 Alison saw a real live water vole while we were looking for moorings. Must be quite a thriving colony there as a family we passed said that they had seen six! (or possibly one winding them up? - Ed)

Quiet night in with a bottle of wine and more of Laura's cooking - precooked chili con carne with rice and another bottle of wine! 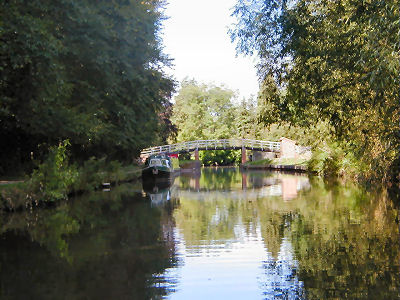 Wall to wall sunshine AGAIN and even hotter - it's not natural! Sauntered into Hungerford for some retail therapy - a pleasant town with some interesting shops - then up to the next winding hole to start wandering back. At the winding hole there were some anglers with the most extraordinary rods - so long they looked as if they could pole-vault the canal with them. Andrew says they would break - but so long - it's a canal, what's the point? 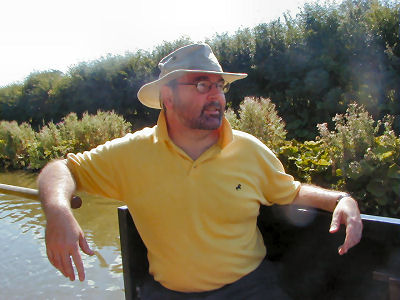 Back through Hungerford and its carpet of ducks. Lunch on the move, Met up with 70' hire boat Kennet Lock and shared the next 4 lock with them. Left them at Great Bedwyn as they intended to turn at the winding hole there. One more lock alone then found a very pleasant mooring close to the bridge to town in case we want to visit a pub (didn't...).

Around 45mins later, Kennet Lock came past so obviously didn't turn... they now have 10 locks to the next winding hole.

Cloudless blue morning, a hot day in prospect so got under way at 09:30 while still quite fresh. Kennet Lock were fishing so not moving anytime soon.. 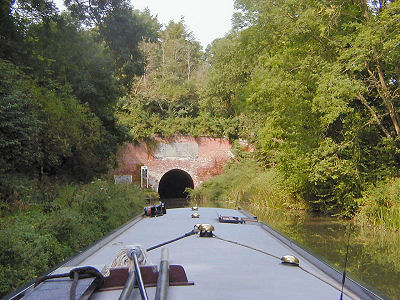 Beautiful day to be in the country side and an occasional cool breeze - but extremely hot and humid. The Crofton visitor moorings almost deserted now. Took on water there before sweating up the flight. At the Bruce Tunnel, Andrew waited for one boat to come to come through then started in to find another boat starting from the other end. We passed in the tunnel with no problems though Alison was glad she wasn't steering!

She took over for the downhill stretch. Kept company at one point by a kingfisher who kept fishing just ahead of us for a couple of hundred yards until we go to the edge of his patch when he sat on a branch and watched us pass him by - what a treat!

Weather hazy by now and humid. Couldn't stop at Wootton Rivers as full so continued to Pewsey Wharf. Arrived about 16:00. Sat and gasped for a bit and then into Pewsey on the margins of a thunderstorm. A number of pubs with reasonable write-ups in Nicholson but we beg to differ... Walked the mile back to the wharf and went into the Waterfront Café. They didn't take plastic and we didn't have enough cash (cash - how quaint...) to allow us all to eat and drink so Andrew (thoroughly cheesed off by now) stalked off back to the boat for a very nice ham & cheese salad. Massive thunderclap just as he arrived back at the boat! Jumped a mile. The others stayed - Cajun chicken, Camembert wedges and gammon & chips and no pud as now feeling guilty!.

A cooler night in prospect and no locks tomorrow - how odd! 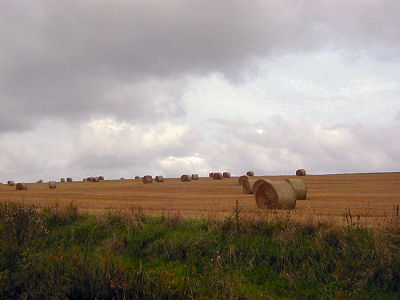 A few boats on the move but many more back at moorings. The canal is very overgrown with reeds at some points (shades of African Queen) so that it would be difficult to pass even another narrowboat let alone a widebeam. Luckily the necessity did not arise.

Arrived at Devizes at 14:00 - Andrew did a deeply cool manoeuvre turning in the winding hole before Devizes Wharf, practically under the windows of the Kennet & Avon Trust HQ then reversed back to a vacant mooring - no fuss, hardly at all. What a star! (gee shucks - Ed).

We then took a look around the K&A museum. Amused to note that the model of the Crofton Beam Engine, though excellent in every way was noisier than the original! And what a guy the engineer Rennie was! Then some retail therapy around town with some good bargains and icecreams to keep the energy levels up. Back to the boat to drop off our purchases then off to the Bear for pizza and drinks. The Wadworth Henry was disappointing this time so swapped over to 6X after the first pint.

There was a small fairground outside as part of the Carnival season so Marc had a go on the dodgems and thoroughly enjoyed himself. Candy floss, honeycomb & nougat for pudding. Left the noise behind and rolled back to our quiet mooring!. Somewhat disturbed night due to massive meal...

Up at 07:00 to start packing. Another beautiful day - we have been so lucky. Saw a heron in a face-off with a pair of swans. He wanted to fish in their roosting spot and it was the swans who backed down and let him stay.

Drifted slowly back to the Marina, got a berth right by the wharf so no scrambling across other boats when unloading. Took it gently but unloaded and ready to go by 10:00. Not able to refuel due to diesel pump failure.

Said farewell for 6 months - back in Feb 2006. Wonder where she will be by then?