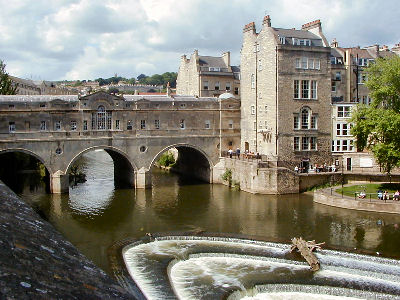 This was our second week on Sojourn and quite a different experience (especially weather-wise!). Since our February trip, Andrew & Alison had taken (and passed) a RYA Inland Waters Helmsmans Certificate (IWHC) course so feeling a bit more confident in handling the boat.

Andrew arrived by public transport, via Cardiff where he had had a meeting earlier, at 5pm. Had a wander round Devizes (very hot weather) followed by a pizza and 2 pints of Wadworth Henrys at the Bell Inn.Alison and kids arrived around 9.20pm. Car unloaded and excess bedding etc moved to car to avoid clutter. All stowed fairly quickly and headed for bed by 10:45pm - it's a long way from North Wales to Wiltshire.

A leisurely start, partly because we were hemmed in by other boats on all sides. Since the hire boats to one side looked as if they has hours of preparation to go, we asked for Solar May outboard of us to be moved, so we were off by 10:30. Found lock gates at the start fairly heavy but thankfully one or two of the vast throng of spectators gave us a hand. We were into the Caen Hill flight proper by around 12:15. About 1/3 of the way down the oil pressure warning started to shout at us. We topped up with what spare oil there was but it soon started again. Andrew went ahead to see if he could find more supplies at Foxhanger Wharf while Alison nursed the engine down the rest of the flight. The BW lock-keeper was extremely helpful through all our troubles even carrying the oil from Foxhangers back to the boat on his quad bike! A call to the Ownerships hotline got an engineer to us by around 18:00. To his intense embarrassment, the engineer discovered that during the previous oil change, the old filter seal had remained stuck to the engine (un-noticed). The new filter had obviously made an initial seal which failed once the engine had warmed up a bit... Problem soon fixed once identified. Stayed put for bangers & mash in a lovely fresh sunny evening. 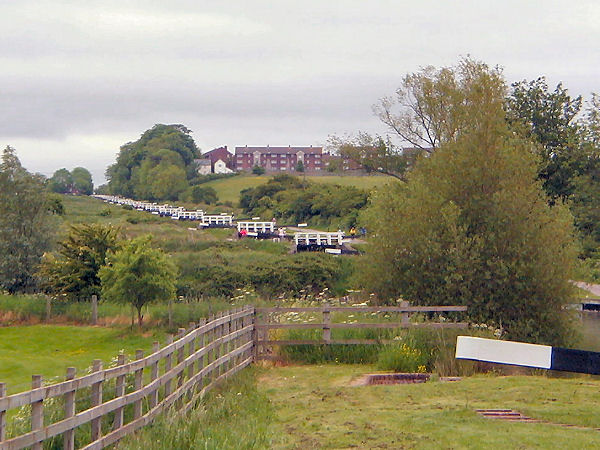 A deeply energetic day - even though we hadn't got all the way through all of the Devizes locks - meant a glass or two of beer was strictly medicinal. And thanks to the kids, devoted crew members, sandwich makers and orange squash dispensers throughout today's trials! 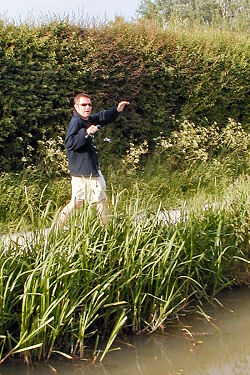 Up 8ish. Toast for breakfast as nearly out of milk. Nine locks to do before meeting up with Gobeys. Underway around 09:10. Topped up water at Foxhangers. Singly through locks 27-22. Several swing bridges encountered but luckily other boats in front to work them. Paired up through locks 21 & 20. Aussie sounding team and kangaroo drawing on side of their boat. Steerer told Andrew that there was a mooring outside the pub just through bridge 153. Miraculously given the time (12:00 on Sunday) it was free! So got moored right outside the pub! Lots of spectators! Gobeys had arrived around 11:15 so we went straight into the Barge Inn (Seend). Excellent meal (Andrew - Steak with peppercorn sauce, Alison - Steak & kidney pie, Laura - Aubergine, feta & field mushroom strudel, Marc - Roast beef & Yorkshire pud (not pleased about child portion!)). Puds followed (A&A lemon and lime cheesecake, Marc chocolate fudge cake and Laura brownies with CUSTARD(!)). All washed down with a couple of pints of Wadworth Henry's. 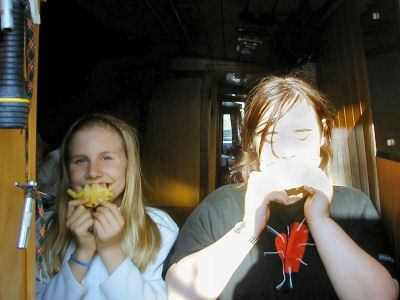 Off around 2pm. Had to squeeze out through willow tree as another boat had breasted up. Alison later thought that the branches had swept her bag overboard but she had put it away... Pottered down to Semington. Moored up to visit the shop to buy milk. Shop no longer exists. Bad Nicholson! Bad! Julian found a Good Samaritan who gave us two pints of milk and would not take payment! Headed back as far as Seend bottom lock where Gobeys left us to walk up to car. Needed to use gangplank as lots of reeds. Bacon lettuce & tomato sarnies while watching Top Gear. Bed around 10pm. Andrew tried pulling out the double bed but rather squeaky!

Off around 09:30. Up 3 locks to winding hole near Barge Inn. Took all morning to get back to overnight mooring! Jacket potatoes, baked beans & cheese on the go for lunch. Pushed on towards Bath throughout the afternoon. Lovely countryside, green valleys, dense woodland and farm fields. Quite busy with lots of moored boats and oncoming traffic. One boat not watching and rammed us head on. Alison (who was steering Sojourn at the time and, in case we haven't mentioned, is a qualified helmsman) was not impressed! 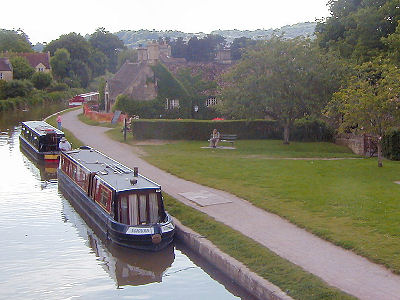 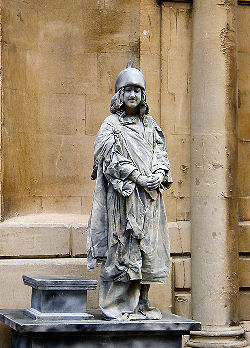 Walked into Bath and spent pleasant half-day shopping and sightseeing. Roman baths very interesting with Audioguide devices allowing a lot of flexibility in how you go round and the depth to which you explore. On arrival in Bath very welcome lattés and hot chocolates. Lunch in Burger King followed by rather nice Ben's cookies (Buy 5 get 2 free!). Laura got her eye-liner and Andrew a car charger for new phone. Kids too tired to walk back to Sojourn so Andrew went and fetched her and soloed down to winding hole just before Bath Top Lock. 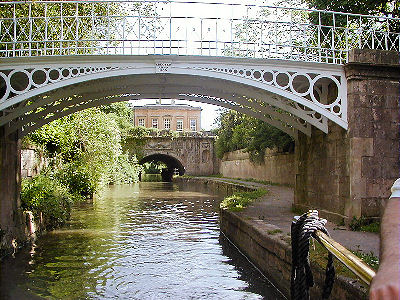 Picturesque passage down to Bath as the canal company went to a lot of effort to build pretty bridges etc to pacify the landowners who weren't keen on a working canal passing through their land. 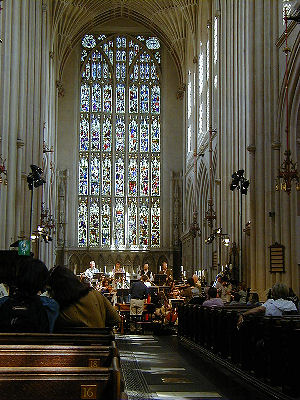 While waiting for Andrew Alison and kids went into Bath Abbey where Kings Consort were rehearsing. Perfect for Alison. Marc won a ruler doing a treasure hunt round the Abbey. 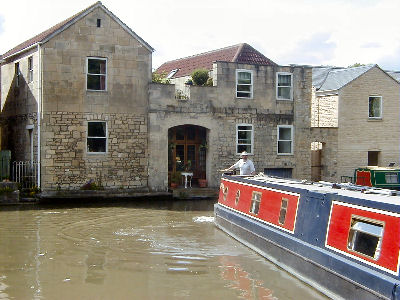 Back at the boat, kids climbed on board before winding complete and grounded the bows. Andrew a tad ratty about this! 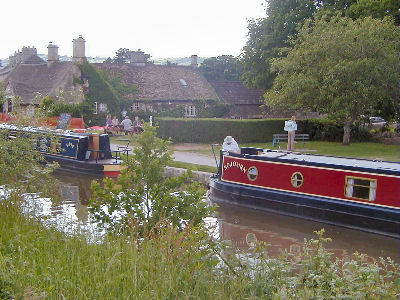 Headed back to Bathampton and moored back in the same place (though facing the other direction of course!). Had a bottle of lager accompanied by olives & pork scratchings bought earlier in Bath market where the kids also got a book each. Later had a pint of Abbott Ale in the pub before returning to eat chili and rice while watching "Lion King". Good film despite Laura's constant criticisms! 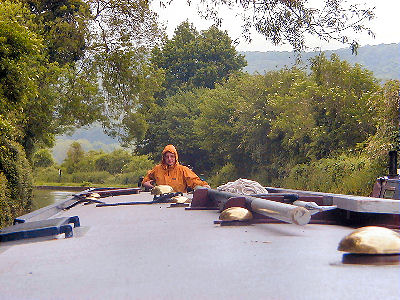 Not exactly flaming June. Cool and misty start to day. Underway around 09:45. Alison to shop first for milk and lardie cake! Planning to stop for brief explore of Bradford on Avon which looked very nice on way down. Aiming for Seend area by end of day ready to ascend Caen Hill on Thursday. 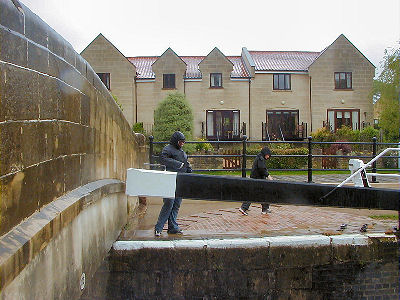 Started to rain around 11:20. Had coffee and remains of Ben's cookie to ease the pain... Passed Sapphire (Ownerships?). Rain continued most of the day which kept most other boats on their moorings. Moored below Seend bottom lock. Didn't stop at Bradford on Avon in the end due to the rain. Considered wandering up to the Barge but stayed on board and had chicken korma instead.

Early start to attack the Caen Hill flight. Through 5 Seend locks and then paused at Foxhanger Wharf to get water and pay for oil from Saturday's incident. 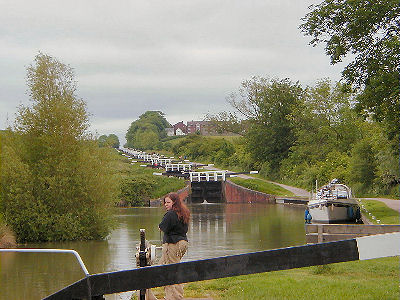 Paired up with Silent Swan who initially were just going to do the first 7 locks but eventually did the whole journey to Devizes with us. Fairly event-free trip up the flight apart from an encounter with Mr Angry about 2/3 of the way up. Our crew had just turned a lock as we were a lot closer than the Sally Boats Eve coming down. Mr A. then proceeded to tell anyone who would listen (and quite a few who wouldn't) how terrible this was. He apparently is an "experienced boater even though he was on a hire boat today" (NB: he brought up the hire boat thing not us) and that we as owners should know better! (being called an owner was quite nice though...) What he failed to mention was that he was descending the flight alone not paired up and so "wasting" 1/2 a lockful every time whereas we who had paired up through the entire ascent were making far better use of the locks. His companion on the boat looked distinctly embarrassed!

We arrived at Devizes around 17:30 where we collapsed round a beer and the remainders of the olives from Bath. Later went into town for excellent pizzas at the Bear. Alison on the Summersault and Andrew on the Henry's again (both Wadworth naturally). Retired fairly early.

Up early (07:30) to finish log and start packing. "Solong" who had moored just ahead left around 8am. We got away around 09:30 for final mile to Devizes Marina. Had to wait a bit to move up to wharf for pumpout & diesel. Away just after 11:00 for trouble free journey home. Roll on August!